Certainly one of the biggest opportunities in ad tech today is integrating real time bidding (RTB) systems to core ad serving platforms such that ad serving decisions are made from a single system. This vision of a fully integrated monetization stack is known as holistic ad serving, and it’s going to be big.

Holistic ad serving consolidates what is today a fragmented marketplace, modernizes the publisher ad serving stack, and lays the groundwork for advertisers and publishes to transact guaranteed campaigns over RTB infrastructure.  In other words, it provides a way for publishers to transition from a world of manual campaign implementations to accepting and trafficking campaigns programmatically without having to manage the balance between two systems.

Tactically, holistic ad serving is a seems like a basic change – instead of filling direct campaigns first and then letting the exchange try to fill whatever is left, the idea is for publishers to call to the exchange marketplace and get a bid for every single impression, thereby allowing RTB demand to compete directly with the traditionally sold campaigns with guaranteed goals.  By at least getting a bid for every impression, the publisher’s ad server can understand the benefit or cost of filling an impression with a direct campaign – it has all the information.  Holistic ad serving also opens the possibility, on an impression by impression basis, for an RTB campaign to trump a direct campaign.

Holistic ad serving represents a major shift in the way publishers currently integrate with ad exchange demand, though in a good way. Today publishers use a core ad serving technology like Dart for Publishers (DFP) or 24/7’s Open Ad Stream to manage their directly sold campaigns and then redirect to a supply side platform (SSP) like Rubicon Project or PubMatic to manage the exchange and indirect demand on their inventory, tethering the two systems together with a 3rd party tag.  The problem here is that the publishers have made a big assumption with this setup: that the yield from an SSP will never exceed the yield from their direct business and it always makes more sense economically to serve a directly sold campaign than an indirectly sold campaign. In prior years before RTB marketplaces existed, this assumption was pretty sound. Ad networks could rarely compete with the rates the publisher charged when dealing direct to advertisers as their business model was fundamentally different. Networks sold efficient reach while publishers sold targeted frequency; you’d never expect the former to pay more than the latter. In the world of RTB however, this assumption makes less sense by the day. As advertisers are able to define their own targeting, programmatically optimize to goals, and trade network markups for a DSP’s ‘cost plus’ pricing there are more and more cases where an impression is worth more to an exchange buyer than a publisher’s directly sold campaign.

To be clear, premium RTB rates are still the exception, but the overlap is growing and it will soon represent a not insignificant piece of the pie for many publishers. As a publisher today, when you look at a yield histogram from your RTB demand, you see something like the below, with a large block of demand clearing at very low prices, probably on or near your floor price. 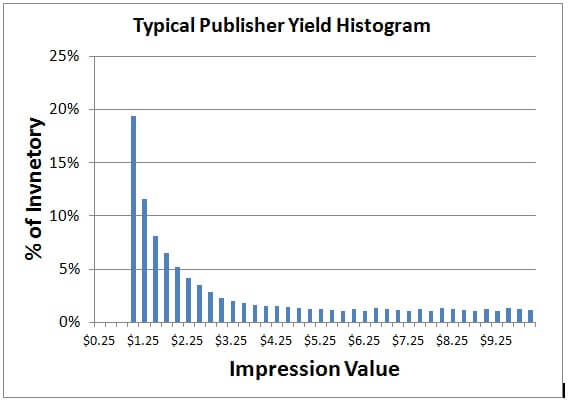 But from there it’s a long tail of higher yielding demand, with a small segment at very premium rates that almost certainly earn more than a publisher’s lowest priced direct deals. And if publishers are paying attention to this kind of reporting, the overlap of bids that exceed directly sold eCPM is likely growing each quarter. The opportunity then is that if a publisher were to make a bid request to the exchange for every impression they could take more premium bids overall, and they could also use the inventory the exchanges didn’t want to fill their directly sold campaigns, reducing the number of low yielding RTB bids.

Take the hypothetical scenario below – the publisher has directly sold 30% of their inventory, and is monetizing 70% of the inventory through an SSP. If the publisher has a floor of $1.00, their SSP might only be able to fill half of the inventory, with the rest ending up on Ad Sense, or another performance network of last resort, which likely monetizes at a very low rate. Given this scenario, the publisher winds up with an effective yield of about $5.00 on their direct business and about $2.00 on their indirect revenue at a fill rate of about 50%. 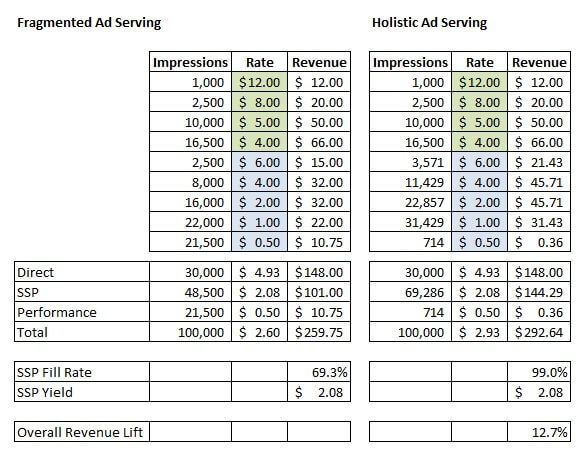 But – if the publisher were to implement a holistic ad serving solution they might find their fill in any given tier from the exchanges is more a function of the inventory they make available, not an absolute impression level, as their direct line of business works. In that case, the inventory they were able to monetize at $6.00 on the exchange ends up being about 4% of whatever they make available, which means they fill more impressions at that price level which would have been used to support a direct campaign. Now that the ad server knows the yield from every source for every impression though, it can serve all $6.00 indirect demand over the $4.00 and $5.00 direct demand.

To logically play that decision out across all impressions means the ad server will likely push all the direct demand into the capacity that had been used for the performance networks. Which brings up one of the potential risks of moving toward holistic ad serving – which is that by allowing exchange cherry picking, publishers risk a system that shifts their higher-yielding inventory to lower performing impressions, likely later in a user’s session, and probably in ad slots below the fold. From a monetization perspective though, the impact is pretty positive. Even if the SSP’s yield remains flat, the fill rate is likely to increase, resulting in an increase in overall yield – in this example the gain is equal to about 13% in found money. Not much from an absolute point of view in our example, but for any business that throws off a considerable amount of money on their indirect line of business, and many publishers do, a double digit gain in yield is tremendous.  The more system yield histograms overlap, the more opportunity there is for a publisher.

It isn’t all that difficult to see why a publisher might want to move toward holistic ad serving, but the next question is how exactly they go about doing it. The SSPs are doubtlessly all working to devise a solution, but few seem to be out in market with a product just yet.  The two exceptions I’m aware of today are OpenX’s integration of their Enterprise Ad Server with their exchange optimization platform and recent acquisition, LiftDNA.  You have to be on both products to take advantage of the seamless integration, but it does purport to be a working holistic ad serving solution.  For publishers not on OpenX and hesitant to change, LiftDNA actually has an interesting standalone product, which cleverly works through ad server APIs to traffic and constantly re-prioritize exchange demand as separate placements in the publisher’s ad server, and DFP’s one-click opt in to ‘dyanmic allocation‘ with the DoubleClick Ad Exchange.  The standalone LiftDNA product benefits from being a truly open solution that can work with any indirect source of demand, but it doesn’t truly evaluate exchange yield on an impression by impression basis like it can when working through OpenX’s ad server.  Google’s ad server DFP does pass exchange yield impression by impression, but only from their own exchange, not any others. And while I have no reason to think the product doesn’t serve publisher interest alone, some might say that because DoubleClick is part of Google and Google also owns advertiser facing products like AdWords and InviteMedia means their publisher facing yield management product inherently has a major conflict of interest.

While it seems like a simple concept – just make a bid request for every impression – integrating ad servers with SSPs is actually a tremendously complex task.  Holistic ad serving moves the ad serving decision from one system to many, and the key concern is how to go about that without adding huge amounts of latency to the process.  In my mind there are two basic ways to integrate these technologies, and neither is ideal.  The first would be to push the exchange intelligence into the ad server by making a bid request to the exchange in a site’s header code, and then populating the highest bid value into the ad server using a key value parameter.  The downside to this approach is that it adds a race condition to the page, and makes the page wait to load the publisher’s ad tags until the exchange responds.  Any solution in this direction needs a reliable way to abandon or timeout the request to the exchange after a certain amount of time so the page can continue to load.

The second and superior option would be to connect the systems via API, and have the ad server cookie sync with the SSP.  That way, the publisher wouldn’t have to wait to make the call to the ad server, they could do that straightaway and then let the ad server abandon the exchange request from within their own system.  Regardless of the setup, the technical challenge in both cases is that holistic ad serving introduces a race condition and now has to wait on a 3rd party system in order to make a decision.  Even if the ad server has a way to timeout a response from the SSP after a certain amount of time, it’s almost impossible to think an SSP to ad server integration doesn’t add latency to every impression.  This isn’t necessarily the SSP’s fault either, since it has to wait on DSPs and the exchanges to respond to its requests, but it’s a problem nonetheless.